I usually listen to music when taking the bus to various places, and recently I have started – for no real reason – picking out lyrics from songs that, out of context, could be associated with climate change. The one that seems most relevant this week? 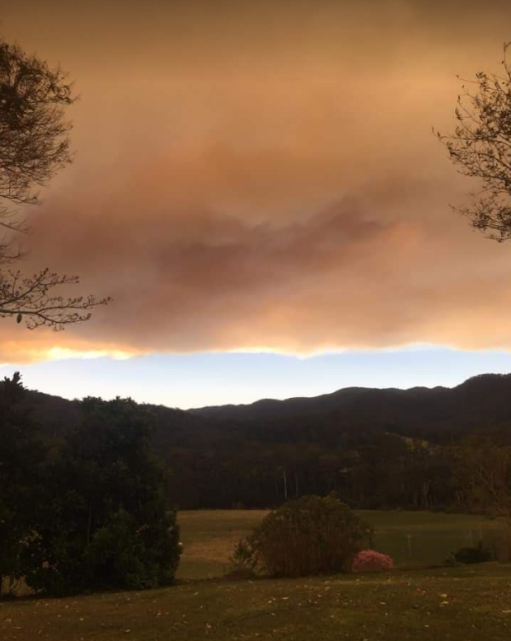 Red sun through the smoke and dust

Both Queensland and New South Wales have raging fires sweeping over the States. Houses have been lost, some residents have been told it’s too late to evacuate – their best chance is to avoid the heat. A friend from Coffs Harbour – not even an affected region – sent the above images yesterday.

A dust storm mixed with smoke swept over the area. At first, my friend called me from a shopping centre to say the sun was a bright red colour and that some people were actually concerned or scared. After jokes about doomsday prophecies were swapped, it was confirmed to be a dust storm – and then the news about the fires came in.

My friend may be safe, if troubled by the air quality, but many others certainly aren’t. I can’t help but imagine how ecstatic Scott Morrison is about these fires. Sure, I don’t picture him celebrating the raging flames reaching across the country or anything so macabre. But it was only recently that he refused to send any aid to fight the fires in the Amazon, which earned him massive condemnation.

The irony is, now no one can ‘deny’ his reasoning. He claimed that we could not send aid because we don’t want to be caught out low on resources if we got any fires here. At the time this seemed like rubbish – and it still is, seeing as the Amazon problem is a global crisis – but his fretting over ‘national interest’ has been delivered a godsend.

The political mileage he, or at least his supporters, will get out of this coincidence will be maddening, I’m sure. But the only problem is, it’s not a coincidence, is it? This is a government that has rejected all pretence of tackling climate change, despite it being one of the two deadliest threats to organised human life (the other being nuclear war).

This is a government hellbent on fossil fuel projects, all of which are incredibly flawed even on the economic basis they cite. This is a government, along with the opposition (specifically QLD Labor) who are dedicated to shutting down peaceful protests that want to bring about climate action. They have refused to back renewables projects, having belittled Labor for their modest renewables plan by taunting them over where they’d get the money from – as though the world doesn’t already spend trillions a year on fossil fuel subsidies. A government that has wrecked the Murray-Darling due to immense corruption and mismanagement, no doubt contributing to the lack of water and dryness in NSW (which now has a state-wide fire ban).

Those wretches in government know exactly what they’re doing, just like Trump in the US, Johnson in the UK, Bolsonaro in Brazil… Climate change is now at an irreversible stage, and the world is literally burning beyond all natural expectations to tell us. Any lives or livelihoods lost, any catastrophes caused, it all falls on them and their dangerous neglect.

Usually I don’t look much to symbolism in images, but the red sun, even with all it’s scientific explanation, is an ominous warning. The skies darken and the waters rise – humanity will have nowhere else to go.

Liked this? Read There’s No Justice, Only Flames

View all posts by Aus_Anarchist